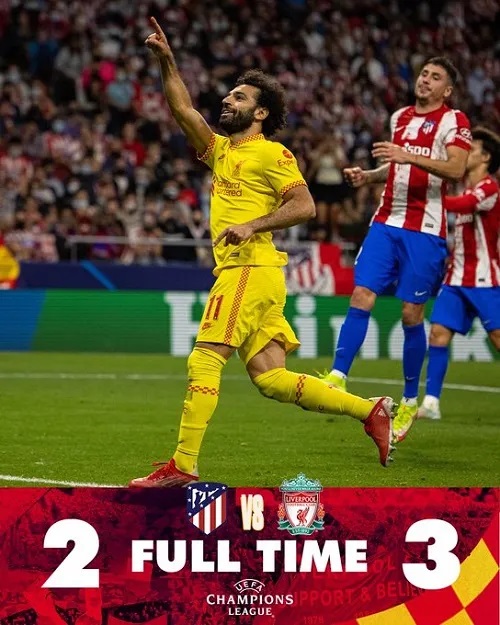 After moving past three Atletico players and shooting in, Salah gave Liverpool the lead at the Wanda Metropolitano, making it nine games in a row that the Egyptian has scored. But a wild contest in Madrid had several twists and turns still to come as Naby Keita doubled the advantage only for Atletico to strike twice before half-time, Antoine Griezmann pulling his team back into the match and leaving Liverpool looking temporarily disheveled. 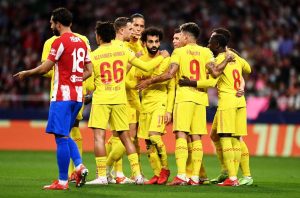 Yet Griezmann was sent off in the 52nd minute for a high foot into the face of Roberto Firmino and Liverpool made Atleti pay, a clumsy challenge by Mario Hermoso on Diogo Jota giving Salah the chance to win the game from the spot. Even with 10 men, Atletico thought they might have snatched a draw late on as Luis Suarez, on off the bench, prepared to take a penalty against his former club with his first touch. Instead, referee Daniel Siebert infuriated the home crowd by cancelling his decision after consulting the replay.

Liverpool move five points clear at the top of the group, with Atletico seemingly left to scrap it out with Porto for second place. They have four points each. Between his two goals, Salah was often on the fringes of a game that was high on adrenaline but low on craft and creativity. Yet the 29-year-old proved the difference again, adding his 11th and 12 goals of the season and showing why many now have him as favourite for the Ballon d’Or.

CHECK THIS: UCL: Messi and Mbappe Lead PSG To Victory Against Leipzig

Diego Simeone’s plan seemed to be to have Thomas Lemar doubling up with Yannick Carrasco when Salah moved into threatening positions but in the eighth minute, Salah just nipped past both of them. He collected the ball far out on the right towards the corner flag, danced inside Carrasco, Lemar and then finally Koke before unleashing from the edge of the box, his shot deflecting off James Milner.

Atleti had barely paused for breath when Liverpool made it two, this time Felipe with some uncharacteristically limp defending, his wild clearance plopping up to Keita, who whacked it first time on the volley into the net.